HELP ME PURSUE MY DREAM

I want to write a book or somehow share my story....

When I was starting grade 12 and had big visions for my life - from playing field hockey for UVic and becoming a lawyer - my mom committed suicide.  Shortly after, I lost the rest of my family....in the sense that they made the decision to caste me aside.  I went through years of depression, without having the support and comfort of family to help me through, but I somehow found my way.

After graduating with my first university degree, the job market plummeted and my years of financial independence and helping my dad out financially became too much of a burden.  I filed for bankruptcy.  Bankruptcy for a mere $6000 in credit card debt (nothing!), which turned out to be the worst decision of my life and has cost me more, financially and personally, than any other decision I've made.  I'm not one for regrets but I regret that choice, as I am still paying for it and will continue to do so for many years.

I have since completed another degree, in order to afford me more career options, which has currently landed me into the craziest of crazy stories - one in which I am currently technically homeless and on medical ei, even though I belong to a union and have an impeccable track record.  It's a crazy story but one that is currently ongoing, so I can't say too much.

I have also previously been assaulted by a client - and that was before I worked in law enforcement - and my employer told me "that's life".  Needless to say, I quit.  That's not MY life.  In this same job, I also advocated for a client who was clearly experiencing some sort of trauma or psychosis but the hospital staff chose to ignore my pleads because the client was a homeless man.  He died shortly after from head injuries he had sustained from getting beat up - that was why he had been behaving so strangely.

This is just a small glimpse into some of the crazy stories of my life but anyone that knows me, knows I do - and always will - believe in the goodness of humanity and will, as a result, put others before myself.  Something that seems to be a lost art and has come at quite a cost to me, many times.  However, it's who I am and it's firmly ingrained into my value system, so I have no desire to change that....no matter the cost to me.

HELP ME PURSUE MY DREAM

What is there to say about me...I think it's fair to say that I am equal parts silly and introspective and there is nothing in this world that I find more important than people. How we treat each other and how we value ourselves and human relationships is, in my opinion, the cornerstone to a happy and just society. All that seriousness aside - I love snowboarding, the mountains, fresh air, field hockey, and water (whether it be an ocean, a lake, or a river). Those times when I am out exploring and playing outdoors is when I feel most content and most youthful. 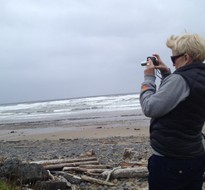 LEARN MORE ABOUT OUR VISION & WHO WE ARE

CONNECT WITH OUR NETWORK